Candles, animals, musical instruments, bulky hampers and alcohol are among items banned from the public events during the visit of Pope Benedict XVI to Britain next month because "they could pose a threat to others". The list, issued by the Catholic church of England and Wales, is aimed at the tens of thousands who will be attending a prayer vigil in Hyde Park, London, and the beatification of Cardinal Henry Newman in Cofton Park, Birmingham.

According to the official papal visit website, people are welcome to "bring a pilgrim picnic" but they should consider bringing nonperishable foods or "make arrangements to share picnics as appropriate". Hampers and cool boxes "should not exceed 20in x 13in x8in (51cm x 33cm x 20cm)".

The website also states "there are a number of things you should not bring with you as they could pose a threat to yourself or others" – including barbecues, whistles and gazebos.

Catholics are permitted to have sunblock, banners, flags, cushions and small folding chairs.

Fr Federico Lombardi told Vatican Radio that, "People cannot move freely on foot to where the three major public events will be taking place. They must use arranged transportation and all the seats must be allocated to an extremely precise number."

TV presenter Carol Vorderman will introduce a series of "warm-up" acts before the pope appears to a crowd of 80,000. However, and this is very rude of Fr Federico, the well known comedy act, MadPriest And Mimi, have not been invited to perform their popular stand up act despite their obvious love for the Holy Poppa.

COMMENT: I'm no culinary expert but I would have thought that "nonperishable foods" would be extremely difficult to digest. 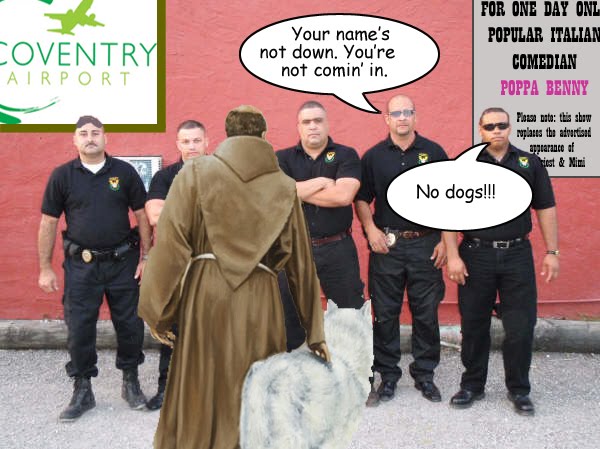