Last Friday, in the THE CATHOLIC HERALD, William Oddie had a go at Archbishop Nichols for not stopping the "sacrilegious masses" held twice a month at the Church of Our Lady and St Gregory in Soho, at which the congregation consists mainly of gay people.

But Oddie is not my choice for today's homophobe award. It goes, in stead, to the commenter, Brenda Mary Walsh, who sent in the following in response to the article.

My friends and I were there at Warwick Street a few years ago when those Masses began. I, myself chatted with various members of the Gay Attendees after Mass. All of them that I spoke to admitted that they were practising sex. Two Lesbians told me that they were very much in love and to defend their undying love for each other, they told me that they have been sleeping together, sharing the same bed for over 20 years. I have seen men actually kissing in the congregation. I actually seen with my own eyes, a man fondling another man's backside, rubbing him and squeezing him on the way up to Holy Communion.

I have witnessed overt flirting amongst homosexuals. They seem to get extra FLIRTY when Fr Timothy Radcliffe is the celebrant. God help us, thats all I can say. And yes Archbishop NIcols has the power to stop these Masses. The Pope has the power to say the word if bishops are opposing him 'I am the Pope" so Archbishop Nicols has this same power. Whilst we are delighted to see many refreshing changes under Archbishop Vincent, the CHANGE most needed has not come - Stopping these Masses - many Catholics have told me that they are so disappointed with our Archbishop over this. This is the ONE issue that we thought that Archbishop would put a Halt to it. And if the truly values his own soul, he really needs to listen to Pope Benedict about using the Rod. But I have always told catholics to give the Archbishop time, but that itme is now well and truly up!

I was so appalled, so shocked that I wrote a very serious letter to Cardinal Murphy O'Connor.

COMMENT: What the heck is Ms Walsh doing attending this mass if the thought of it repulses her so much? She sounds like a top of the league curtain twitcher to me, always poking her self-righteous nose into other peoples' business. get a life, Mary, and let other people get on with theirs! 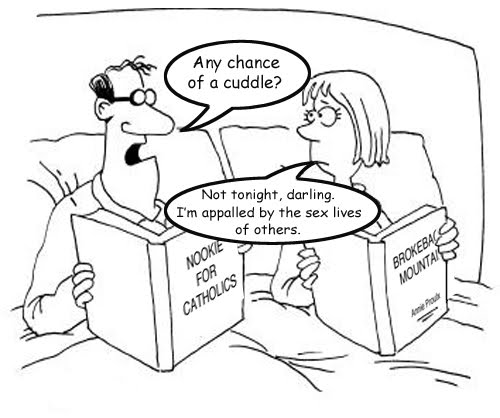