Today we said goodbye to Callum. There were tears a-plenty and there will be more later. But it was the right time for his passing.

Callum was Jane's "once in a lifetime" dog. He was a gentle and loving giant of a border collie, always willing to please and always at Jane's side. He was the first dog she trained and competed with seriously and the partnership got almost to the very top of the Obedience world. When Callum was in his prime, you couldn't see the paint on the hallway wall as it was covered with rosettes. We had to buy a cabinet just for his trophies.

That Callum made it to over fourteen years is a miracle. From a puppy he was plagued with various illnesses that required surgery and long treatment. Jane jokes that his insurance paid for the brand new hospital our vets built a couple of years ago. Two and a half years ago we were told he only had 24 hours to live and that we should have him put to sleep. We knew they were wrong (doggie people know such things instinctively) and, sure enough, the following day he was running around the garden like a puppy. So we are so grateful that we had those extra years with him and both Callum and ourselves thoroughly enjoyed them.

But there is one thing above else that I owe that dog big time for. I truly believe that the chances of myself and Jane getting through my illness as a couple, all those years ago, would have been far, far lower if Callum hadn't been there as a faithful and constant friend for Jane when I was in hospital and she was having to cope with everything on her own (there being, unsurprisingly, no help forthcoming from the Church).

His strength in the face of adversity made us strong. We will survive our bereavement to a large extent because of the example of our big, handsome boy.

God be with you, Callum, old friend.
You are going to be one of his favourites. 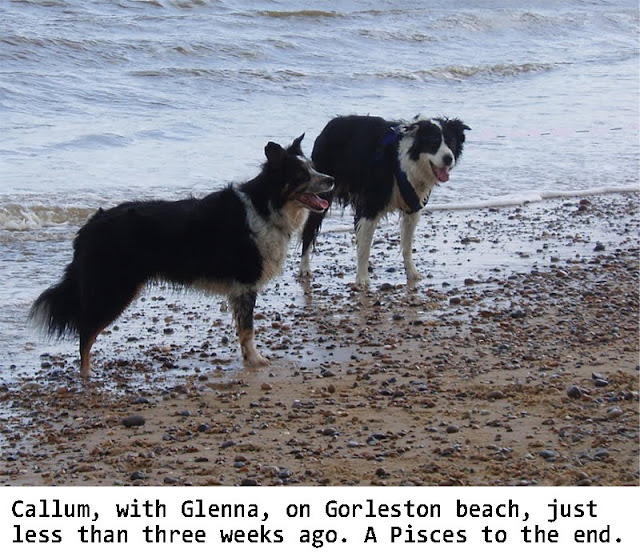