A 30-second television commercial that ran in the United States during the England-USA soccer match on Saturday has Catholic bloggers charging that the advertisement is blasphemous and mocks the core teachings of the church.

The ad begins with singing in Latin, and depicts an Argentine “church” – complete with a stained-glass window of a soccer ball -- in which the wildly popular sport is clearly what’s being worshipped.

Critics complain that Hyundai mocks the Eucharist, which Catholics believe to be the body of Christ, by showing “worshippers” on their knees receiving slices of pizza rather than the communion host. At one point the commercial shows a soccer ball covered with a crown of thorns, part of Jesus Christ’s passion.

Hyundai, a World Cup sponsor, apparently wanted to show how far some fans will go to support their cause.

“Fans show their loyalty in all kinds of ways; ours just buy another Hyundai,” the narrator says at the close of the ad.

“The unexpected response created by the ad… prompted us to take a more critical and informed look at the spot,” the company said in a statement. “Though unintentional, we now see it was insensitive.”

COMMENT: The postmodern cynicism of the disciples of universal capitalism knows no bounds. Adverts such as this one are blatantly stating that the Church has been replaced by the market place and faith in God by consumerism. This advert is not a clever commentary on the modern zeitgeist. It is a song of triumph. A knowing "Up yours!", not just to Christianity, but to all who have fought against the commercialisation of everything. It is offensive. It is saying, accurately, that nothing, not faith, not joy in sporting achievement, is important to anybody anymore except for the never ending desire to own the latest product.

Progressive and liberal Christians should be just as offended by these attacks on our humanity as the most reactionary puritan. More so, as this issue is about freedom. The Hyundai advert is stating boldly that we are no longer free to choose. That we are all yappy, little Pavlov's dogs, conditioned to purchase whatever the stimulation. 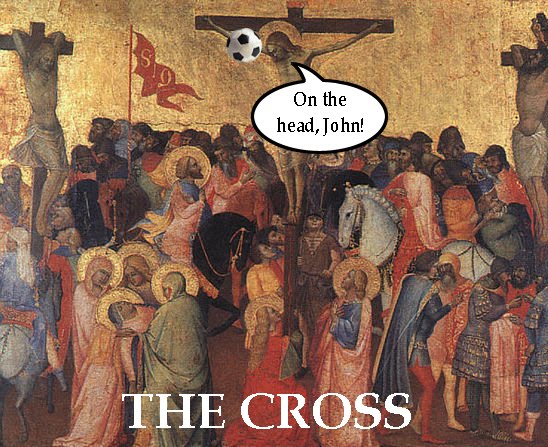