This would be great news for Australian Roman Catholics but incredibly bad news for Roman Catholicism in general. To appoint probably the most reactionary, dictatorial, arrogant (and, intellectually, downright daft) bishop in the English speaking world to such an influential post at this time of crisis for the church is as wrongheaded as giving the job of Secretary-General of the United Nations to Kim Il-sung. 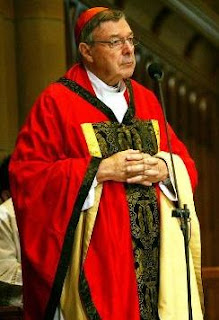 Speculation that Australia's Cardinal George Pell is about to be appointed to a senior Vatican post has strengthened in Rome with high-ranking priests now regarding the move as a done deal. And Cardinal Pell's forthcoming book-launch tour of three states is increasingly thought to be a farewell tour, according to prominent Catholic blogs in Europe and Australia.

Yesterday a leading Italian newspaper, Il Giornale, speculated that just days ago, after Cardinal Pell had met Pope Benedict XVI, he had spent an hour with Cardinal Giovanni Battista Re - the current prefect of the Congregation for Bishops. The report by journalist Andrea Tornielli - who has accurately predicted several developments during this pontificate - suggested that the meeting was to discuss Cardinal Pell taking over from 76-year-old Cardinal Giovanni Battista Re, who has been prefect for 10 years. It also said Cardinal Pell had been "officially nominated" as Cardinal Battista Re's successor by the Pope.

The Congregation for Bishops oversees the selection of new bishops around the world.