From Jean-François Copé's article, "Tearing Away the Veil," posted by THE NEW YORK TIMES:

Momentum is building in Europe for laws forbidding the wearing of garments that cover the face, like the Islamic burqa and niqab, in public. Just last week, the lower house of the Belgian Parliament overwhelmingly passed a ban on face coverings. And next week, the French Assembly will most likely approve a resolution that my party, the Union for a Popular Movement, has introduced condemning such garments as against our republican principles, a step toward a similar ban.

Amnesty International condemned the Belgian law as “an attack on religious freedom,” while other critics have asserted that by prohibiting the burqa, France would impinge upon individual liberties and stigmatize Muslims, thereby aiding extremists worldwide.

This criticism is unjust. The debate on the full veil is complicated, and as one of the most prominent advocates in France of a ban on the burqa, I would like to explain why it is both a legitimate measure for public safety and a reaffirmation of our ideals of liberty and fraternity.

First, the freedom to dress the way one wants is not what’s at stake here. Our debate is not about a type of attire or the Islamic head scarf that covers the hair and forehead. The latter is obviously allowed in France. The ban would apply to the full-body veil known as the burqa or niqab. This is not an article of clothing — it is a mask, a mask worn at all times, making identification or participation in economic and social life virtually impossible.

Let’s take one example: The fact that people are prohibited from strolling down Fifth Avenue in the nude does not constitute an attack on the fundamental rights of nudists. Likewise, wearing headgear that fully covers the face does not constitute a fundamental liberty. To the contrary, it is an insurmountable obstacle to the affirmation of a political community that unites citizens without regard to differences in sex, origin or religious faith. How can you establish a relationship with a person who, by hiding a smile or a glance — those universal signs of our common humanity — refuses to exist in the eyes of others?

Finally, in both France and the United States, we recognize that individual liberties cannot exist without individual responsibilities. This acknowledgment is the basis of all our political rights. We are free as long as we are responsible individuals who can be held accountable for our actions before our peers. But the niqab and burqa represent a refusal to exist as a person in the eyes of others. The person who wears one is no longer identifiable; she is a shadow among others, lacking individuality, avoiding responsibility.

From this standpoint, banning the veil in the street is aimed at no particular religion and stigmatizes no particular community. Indeed, French Muslim leaders have noted that the Koran does not instruct women to cover their faces, while in Tunisia and Turkey, it is forbidden in public buildings; it is even prohibited during the pilgrimage to Mecca. Muslims are the first to suffer from the confusions engendered by this practice, which is a blow against the dignity of women.

Jean-François Copé is the majority leader in the French National Assembly and the mayor of Meaux.

COMMENT: Long time readers of OCICBW... will know that I'm 100% in favour of banning any covering of the face in public illegal (other than what may be required for medical reasons). This includes the burqua, but, if I had my way, it would also include motor cycle helmets when the person wearing one is not on a motorbike.

There are two reasons that they should be banned. Firstly, anybody who is a member of, or a guest of, a community that has agreed to a set of laws to govern their lives, has to be recognisable in public, so that if they break any law they can be identified easily. Secondly, in Western culture, at least, the covering of the face is extreme bad manners. And manners maketh women as much as they maketh man.

Do go read the rest of this article. Copé writes well and puts forward an intelligent and logical argument. 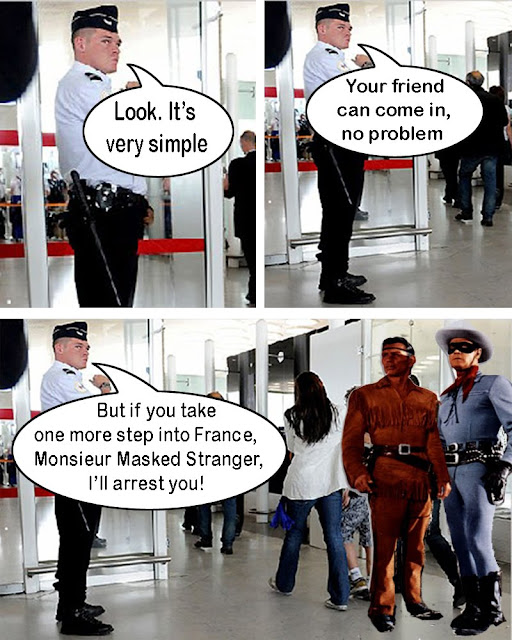 A political row has erupted in the northern Italian city of Novara after police fined a Muslim woman 500 euros for refusing to remove her full-face covering burqa.

According to details released by police, the Tunisian woman, Amel Salah, and her husband, Ben Salah, were stopped by police Friday. Amel was asked to remove her veil, but her husband refused to allow her to expose her face on the grounds that such an act would violate their Muslim beliefs.

'I cannot take off my veil in front of you, because you are two men. I am sorry,' she reportedly told police.

This was Italy's first such fine and made possible after Novara introduced a controversial by-law in January banning clothing which prevented immediate identification in public.

Italy's largest Muslim organisation, the Union of Italian Islamic Communities and Organisations (UCOII), said women should be free to choose. However, the body's president did not support wearing the full burqa.