Tempers flared at a Mdantsane church yesterday as congregants chased away their minister during a morning service. Up to 100 members of St Andrew’s Parish, an Anglican church in NU13, were protesting against the Reverend Warren Bada for apparently “insulting” congregants and refusing Eucharist to those who could not afford a pledging fee. Yesterday Bada demanded that congregants pay a R70 fee to pledge to the church, regardless of what they thought they could afford.

"(Bada) makes chaos in our church,” said Nceba Baca, who protested outside the church.

Bada also used “unacceptable language” during the Sunday service, church secretary, Nolundi Vangani, claimed. “He was disciplining our youth (for talking during the service) … He said they are ‘from dirty wombs’ and that they are ‘sucking poison from our tits’,” Vangani said.

Another visibly furious congregant told the Dispatch that Bada had chased away congregants when they went to discuss their grievances with him.

The congregants protested outside the church until eventually Bada was forced to flee. Then some of them followed Bada’s car down the road, chanting “Hamba Bada, hamba (Go, Bada, go)”.

Bada refused to comment about yesterday’s events, and referred the Dispatch to the Anglican Church bishop. But Bishop Ebenezer St Mark Ntlali was unavailable for comment yesterday. 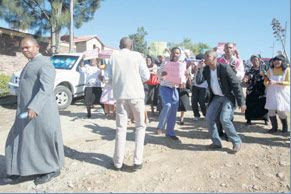