A prominent Roman Catholic bishop in Mexico has blamed eroticism on television and internet pornography for child abuse by priests.

"With so much invasion of eroticism, sometimes it's not easy to stay celibate or to respect children," Bishop Felipe Arizmendi, of San Cristobal de las Casas in southern Mexico, said during an annual meeting of Mexican bishops near Mexico City on Thursday.

"If on television and on the internet and in so many media outlets there is pornography, it is very difficult to stay pure and chaste."

On Monday the Vatican's secretary of state, Cardinal Tarcisio Bertone, said priest paedophilia was linked to homosexuality not celibacy.

"I have recently been told, that there is a relationship between homosexuality and paedophilia," he told a news conference in Santiago, Chile.

COMMENT: From what I recall, back when I was a teenager, pornography is probably a major help in maintaining celibacy and not the opposite as Bishop Arizmendi suggests. In fact, without the assistance of erotica I have a strong suspicion many teenage virgins would probably self-combust (at least, the male of the species would). 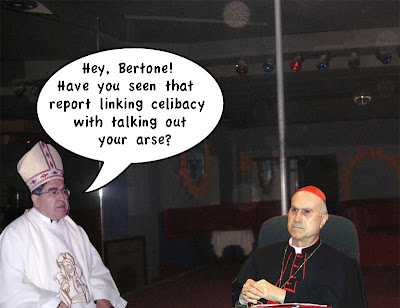