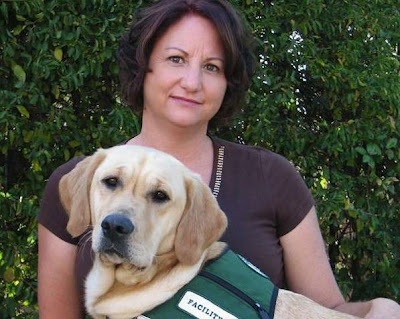 When society’s most vulnerable members are traumatized by crime, facing their attackers in court can make them feel victimized all over again. But when children or the mentally disabled have a big warm dog curled up at their feet, the comfort of their new best friend can help make the anxiety and stress melt away. That’s where Dory comes in. The yellow lab/golden retriever mix has teamed up with San Diego police Officer Lynn Chavez to work with fragile victims of assault or molestation. The 3 1/2-year-old dog helps to ease their fears when it’s time to tell their most personal stories in court in front of strangers as well as the people accused of harming them.

She and Dory have assisted in more than 60 preliminary hearings and more than 10 jury trials.

Most recently, Dory helped the young son of convicted murderer Henry Lisowski. The boy had to testify against his father, who was accused of killing the boy’s mother, Rosa.

“He absolutely loved Dory,” Chavez said. “It made it much easier for him.”

Dory is a victims’ witness support dog, and her owner has been a police officer for 24 years. Chavez works as a liaison to the District Attorney’s Office.

Chavez does not receive any funds or extra pay for the work she does with Dory or a second facility dog she owns named Naya.

For being there, Dory, Nay and Lynn are our joint...

Thanks to IT's main squeeze, BP, for finding this story.
What a beautiful way to kick start the blog again.