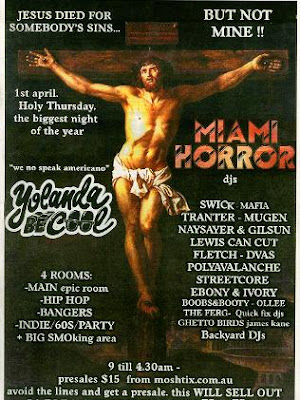 From THE HERALD SUN:

Melbourne Lord Mayor, Robert Doyle, has slammed a city nightclub as 'disrespectful' for using an image of Jesus on the Cross to promote an Easter event. He branded the advertisement "cheap, tacky, offensive, unnecessary, disrespectful and thoughtless".

"You feel like saying to these people 'grow up'," he said.

Catholic Bishop Christopher Prowse said the ad, published in a Melbourne street magazine, was "a real cheap shot" on a "day like no other" on the Christian calendar.