Without referring directly to recent abuse scandals, Pope Benedict noted in his Palm Sunday homily that the Church would not be intimidated, saying Jesus Christ "leads us to the courage to not be intimidated by the chatter of prevailing opinions".

Vatican spokesman Federico Lombardi said on the weekend that Benedict would not be weakened by the scandals, which have prompted some commentators to suggest that the Pope could be forced to resign.

"The recent media attacks have without doubt caused damage. But the authority of the Pope and the commitment of the Congregation for the Doctrine of the Faith against sex abuse of minors will come out of this not weakened but strengthened," he said. 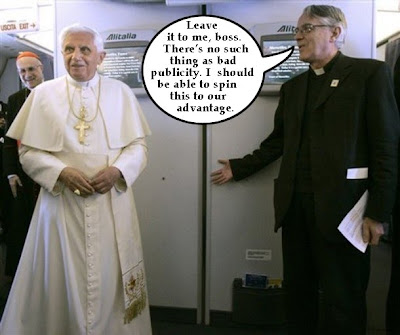 For an excellent commentary of the Vatican's attempt to put
the accusations against it to bed, and loads of "interesting" comments, go to TRUTHDIG. (Link provided by Ellie)