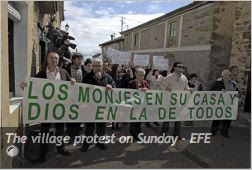 More than 100 people demonstrated outside the doors of the village church in Rabanal del Camino in León on Sunday, demanding that two local Bendictine monks leave the local San Salvador del Monte Irago Monastery. The protestors accuse the monks of breaking traditions of the village by organising a project to renovate the church, but which would see its clock and bell tower being removed.

Complaints started against the monks last August when they decided to cancel the procession of La Asunción, the village patron.

COMMENT: I expect the monks had a very good reason for cancelling the town festival. Perhaps some of the villagers had been naughty and not kept their rooms tidy. Perhaps, and it's only perhaps as I have no proof one way or the other, one of the young men in the village used a condom. Whatever, the monks will be making these decisions for the benefit of the villagers' eternal souls and not because of any personal agenda of their own.