Last year OCICBW... highlighted the plight of Southampton University chaplain, Simon Stevens, who faced redundancy because of Bishop NoseOutOf-Joynt's downsizing policy. Many of you visited Simon's blog and left him messages of support.

And good on you, because the overwhelming support Simon received from the blogosphere merged with the overwhelming support of his students for both himself and a permanent chaplaincy and has led to the formation of a organised campaign which is well on its way to raising the money needed to continue Simon's ministry at the university. It also appears, as is often the case in such situations as this, to have embarrassed the powers that be in Winchester Diocese, into jumping onto the bandwagon and actually trying to do something themselves to save the chaplaincy.

If Simon is anything like me, he will be on cloud nine at the moment. The support of friends and strangers makes mere trivialities, like unemployment and homelessness, so less frightening than when they are faced alone.

The following press release has been posted at 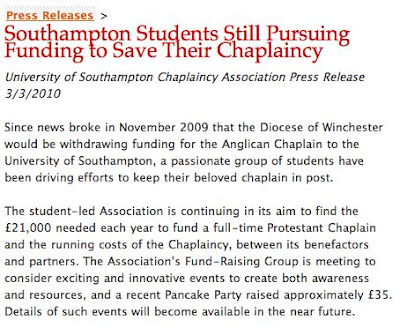 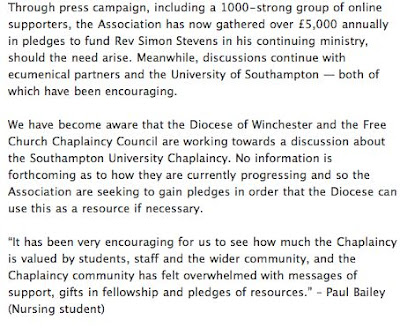