The Islamic Solidarity Games, due to be held in Iran in April, have been called off because of a dispute with Arab countries over what to call the Gulf. The games federation in Saudi Arabia said the Iranian organisers had failed to address its concerns, particularly about the planned logo and medals. These bear the words "Persian Gulf", but Arab countries, who call it the Arabian Gulf, reject the term. 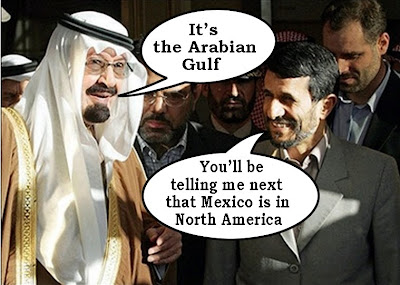 COMMENT: It is, of course, as everybody knows, the Persian Gulf, because that's what the English call it.