Rio de Janeiro's Catholic archdiocese is demanding unspecified damages and interest from Columbia Pictures for showing the iconic landmark being destroyed in a worldwide apocalypse in the film, "2012," that came out last year. The archdiocese manages copyright issues related to the 40-meter (130-foot) high statue erected in 1931, which overlooks Rio with its arms outstretched. The archdiocese holds copyright until 2032, when the sculpture becomes part of the public domain.

In practice the archdiocese allows use of images of the statue "in 99 percent of cases." But it turned down Columbia Pictures' request to show the statue being destroyed by a giant wave.

A spokesperson for the diocese said, "many faithful have said they are shocked and offended by the images of the destruction of this sanctuary that the archdiocese wanted to preserve. We are at the start of negotiations and don't know the amount of damages we are looking at. That will depend on an expert's evaluation."

COMMENT: Surely a ruddy great statue of a god on top of a ruddy great mountain has to be regarded as "in the public domain" from the word "go." I'm not sure but I think English law reflects this obvious fact. Certainly you can photograph the outside of a building without permission but not the inside, as outside is public and inside isn't. If this was not the case then you could photograph or film any building without permission built in the last 100 years or so as architects are artists as much as a monumental stone mason. 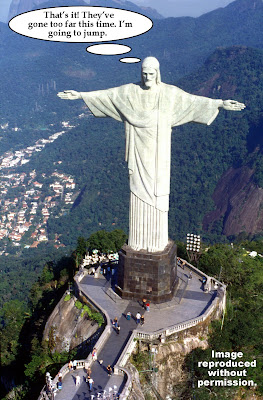