From THE TIMES (yesterday):

A Vatican theologian said today that veneration of relics ran the risk of compensating for empty churches with a boom in religious happenings, substituting miracle-performing sensationalism for authentic faith.

The warning came as pilgrims began queuing to pray before the 13th-century remains of St Anthony of Padua, one of the Catholic world's most popular saints. The skeleton of the saint, who is credited by many Catholics with miracle-working powers, went on display in a glass case at St Anthony's Basilica in Padua to mark the transfer of his remains to their final resting place in February 1350. Today is also known as the Feast of the Tongue because when St Anthony's coffin was opened 30 years after his death his tongue was found to be miraculously incorrupt, seen as a divine tribute to his gift of preaching.

Monsignor Pietro Principe, a theologian whose Biblical commentaries are published by the Vatican, said that the "display of the mortal remains of saints and the cult of relics are part of our tradition. However we nowadays run the risk of crossing the boundary from popular devotion to superstition." 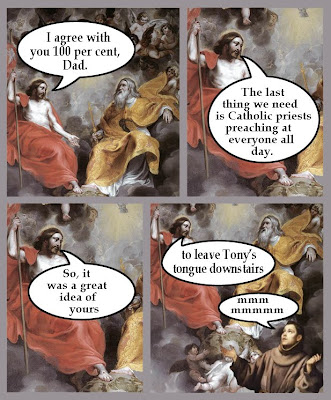