Police in Malawi have launched an operation to hunt down and arrest high-profile gays and lesbians in the southern African state. Fears of an anti-gay backlash across Africa are intensifying after the prosecution of the first gay couple to seek marriage in Malawi, and thousands of Ugandans demonstrated this week in support of a bill proposing the death penalty for some offences involving homosexual acts. Last week five men were arrested at an alleged gay wedding in Kenya.

Malawi has been criticised by international groups for the prosecution of Steven Monjeza, 26, and 20-year-old Tiwonge Chimbalanga, jailed in December for holding a wedding ceremony. The men were charged with unnatural acts and gross indecency and could be imprisoned for up to 14 years if found guilty. A 21-year-old man was recently sentenced to two months' community service for putting up pro-gay rights posters, and a senior minister expelled a woman from her town even after a court acquitted her on charges of having sex with two girls.

Phumi Mtetwa, executive director of the Lesbian and Gay Equality Project, based in South Africa, said the recent series of incidents was no accident but rather the work of US evangelical Christian groups. "It's very well calculated. It's exploding at the moment but it's been happening for a year and a half. We have proof of American evangelical churches driving the religious fundamentalism in Uganda."

Full report at THE GUARDIAN: 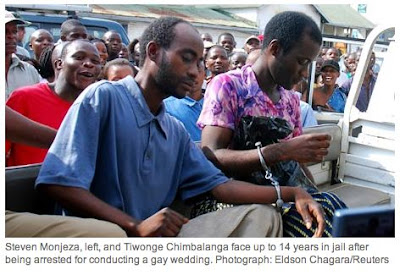 Thanks to Greg for sending this story into MadPriest Towers.