This is interesting. The piece of pottery referred to comes from a period 300 to 400 years before Deuteronomy and Leviticus were written and, therefore, shows conclusively that the faith once delivered to the prophets, let alone the saints, was originally from the "liberal agenda." Sadly, it also shows that, even after 3000 years, God's primary commandments are mostly ignored and the legalistic revisionists are still pretty much in control of the whole shebang. However, although we should remain humble, it is quite a nice feeling to discover we had it right all along.

An ancient Hebrew inscription on a shard of pottery, deciphered by an Israeli academic, shows that the Hebrew Bible could have been written hundreds of years earlier than previously believed. The inscription from the 10th century BC, during King David's reign, is the earliest known Hebrew writing, said a report in LiveScience. The report quoted a press release from the University of Haifa, where Professor Gershon Galil carried out his research n the Department of Biblical Studies.

Many scholars have so far thought that the Hebrew Bible originated in the 6th century BC, because Hebrew writing was thought to stretch back no further.

"It indicates that the Kingdom of Israel already existed in the 10th century BCE and that at least some of the biblical texts were written hundreds of years before the dates presented in current research," said Professor Galil.

The writing was discovered more than a year ago on a pottery shard dug up during excavations at Khirbet Qeiyafa, near Israel's Elah valley and it was initially unclear whether the writing was Hebrew or some other local language. Galil was able to decipher the text by identifying words particular to the Hebrew language and content specific to Hebrew culture.

"It uses verbs that were characteristic of Hebrew, such as asah ('did') and avad ('worked'), which were rarely used in other regional languages," Galil said. "Particular words that appear in the text, such as almanah ('widow') are specific to Hebrew and are written differently in other local languages." 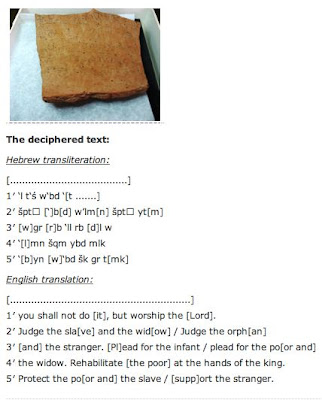