Russians can go nutty when it comes to dogs. Consider the incident a few years ago that involved Yulia Romanova, a 22-year-old model. On a winter evening, Romanova was returning with her beloved Staffordshire terrier from a visit to a designer who specialises in kitting out canine Muscovites in the latest fashions. The terrier was sporting a new green camouflage jacket as he walked with his owner through the crowded Mendeleyevskaya metro station. There they encountered Malchik, a black stray who had made the station his home, guarding it against drunks and other dogs. Malchik barked at the pair, defending his territory. But instead of walking away, Romanova reached into her pink rucksack, pulled out a kitchen knife and, in front of rush-hour commuters, stabbed Malchik to death. 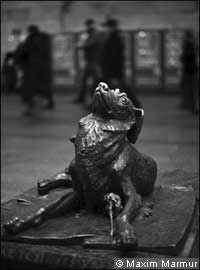 Romanova was arrested, tried and underwent a year of psychiatric treatment. Typically for Russia, this horror story was countered by a wellspring of sympathy for Moscow’s strays. A bronze statue of Malchik, paid for by donations, now stands at the entrance of Mendeleyevskaya station. It has become a symbol for the 35,000 stray dogs that roam Russia’s capital – about 84 dogs per square mile. You see them everywhere. They lie around in the courtyards of apartment complexes, wander near markets and kiosks, and sleep inside metro stations and pedestrian passageways. You can hear them barking and howling at night. And the strays on Moscow’s streets do not look anything like the purebreds preferred by status-conscious Muscovites. They look like a breed apart.

Read the rest of this article about Laika's descendants at

THE FINANCIAL TIMES. It is mostly about the research work of Andrei Poyarkov and what he has discovered about their societies and the way they relate to humans. However, the most fascinating part of the article is when it talks about the benefits of having these wild dogs in Moscow and how the local government is trying to protect them. In this it is a very similar situation to the policy of human/wildlife integration in Anchorage, Alaska.

I live in a country where my ancestors systematically wiped out most of our native mammalian species. We are now beginning to really regret their actions for both aesthetic and environmental reasons. We have even started reintroducing some species, either deliberately, like we have done with beavers or accidentally, like we have done with wild boar. I'd love to see wolves reintroduced throughout Britain. For a start they might help to get rid of those fecking, yankie, grey squirrels!

Thanks to Sam Norton for sending

this article in to MadPriest Towers.