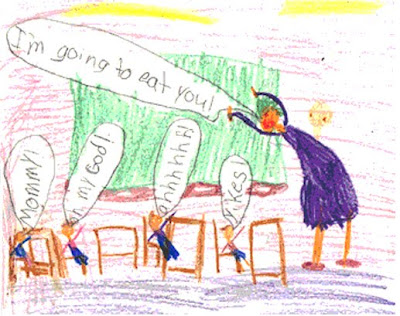 I expect most of us can name the "good teacher" from our
schooldays - the one who encouraged us to achieve what we
were capable of rather than trying to shame us into all
knowledge. My "good teacher" was called Miss Anderson and
I was in her class when I was about seven years old. She
switched me on to the "Narnia" books and taught me my
times tables up to twelve times twelve.

However, what about the bad teachers? The ones who we

feigned illness in order to avoid. The ones who gave us
nightmares. My nemesis was called Mrs Allen and I was in
her class immediately after leaving Miss Anderson's.
Mrs Allen was the devil incarnate. I am old enough to
remember corporal punishment in schools being legal and
commonplace and the teaching profession being the first
choice for sadists and child haters. Mrs Allen took every
advantage of our barbaric education laws and thumped us
eight year olds at every opportunity (the ruler being her
favourite weapon). Her most evil pleasure was to refuse to
let her pupils go to the toilet (bathroom) when they needed
to. This resulted in many a pair of wet underpants and
serious life-long trauma for many.
However, she was nothing if not predictable. If a child ever
spelt a word wrong she would make that child stay in over
break and write out the misspelt word fifty times. The
cleverer ones among us caught on to this quickly and when
it was pouring down with rain outside, or too damn cold, we
would deliberately misspell a word first thing so as to get to
spend breaktime in the warm of the classroom rather than
outside on the playground.

Eventually, under a more enlightened regime, Mrs Allen was

sacked, sectioned under the mental health act and died of an
alcohol related illness. When I found that out in my twenties it
brought a smile to my face - aw c'mon, I'm only human!

So, now it's your turn. I don't want to hear about the nice

teachers in your life. I want the dirt on the evil ones. Go on
- name names and catalogue their crimes. It will make you
feel better about yourselves.