From THE LEMONT REPORTER:

Maria Goretti, 76, a Roman Catholic nun, narrowly escaped her vehicle before it was obliterated by a passenger train Monday, Jan. 18, in downtown Lemont. She was driving a white, Chevy Malibu north on Stephen Street. Attempting to make a left turn onto Main Street, she overshot the road and ended up on the railroad tracks that run parallel to the street. After overshooting the turn, the car hit a fire hydrant and was pushed onto the tracks. The car lay stuck across both tracks. A train in either direction would have struck the vehicle.

Three men working nearby came to the woman’s rescue and escorted the woman out of the car. Less than a minute later, an eastbound train struck the car, pushing it two blocks before coming to a halt near Holmes Street. 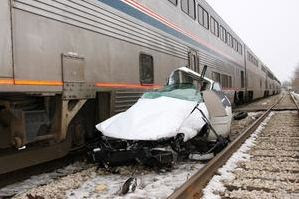 Sister Maria was uninjured and refused medical attention, police said. Nobody was injured on the passenger train that was traveling from San Antonio to Chicago.