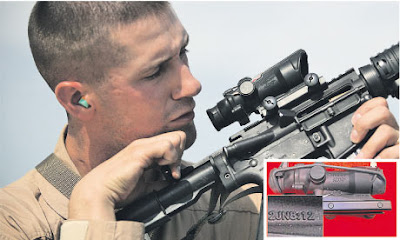 The US military claims it didn't know the raised letters and numbers on the side of its gunsights were anything more than a stock number. And ­neither did the Ministry of Defence: it has just ordered 480 of the ­American-made sights. Then, last week, a US campaign organisation, the Military Religious Freedom Foundation, received an email from a soldier complaining that the inscriptions referred to passages in the Bible. One, JN8:12 – chapter eight, verse 12 in the Book of John – reads: "When Jesus spoke again to the people, he said, 'I am the light of the world. Whoever follows me will never walk in darkness, but will have the light of life.'" Another refers to a verse from Second Corinthians, which reads: "For God, who commanded the light to shine out of darkness, hath shined in our hearts, to give the light of the knowledge of the glory of God in the face of Jesus Christ." The company who makes the sights, Trijicon, was founded by a devout Christian and its website says its "morals" are based on "biblical standards".

COMMENT: That should go down well with the Muslims we are supposed to be helping. The directors of the company who made the sights should be prosecuted for treason.