I have received the following from Tim, up in Canada, along with a note saying this young lady should be a "Brick of the Day" - to which I wholeheartedly concur.

From THE EDMONTON JOURNAL:

As Canadians are urged to head toward the embassy in Port-au-Prince and evacuate earthquake-ravaged Haiti, Devon-raised Sarah Wallace will stay amid the chaos in an isolated city to the south and search for survivors.

Wallace moved to the port city of Jacmel in 2008 to work as a midwife and establish a registered charity, called Olive Tree Projects. The city of 40,000 is her home now, and though devastation in the country's capital dominates headlines, Jacmel is likewise in shambles. Many people are dead. Many more are struggling to survive.

"Haiti needs help and that's why I moved here. I wanted to help them before the earthquake. Now they need the help even more. Why would I stop now?" says Wallace, 24.

Wallace has spent every night sleeping outside since the earthquake, her "adopted" four-year-old daughter Dada by her side. For a while they made their beds on the runway of the local airport, where the UN set up a camp until planes started flying in again on Friday.

In the morning, Wallace hops into the Ford Ranger she bought last month. The truck was meant to transport pregnant women to the maternity centre Wallace was working to build before the earthquake. Now, sometimes alone, sometimes with Dada, she drives out in search of the injured or lost, at times to hand out food, at times to transport others from the rubble to the overwhelmed hospital or camp.

Over the last five days, Wallace, who speaks fluent Creole, has been surrounded by horrors.

"Broken houses; people sitting outside their homes waiting for the word that it's all over; people hysterically crying because of lost ones; dead people on the street or in the backs of trucks. I have asked if the UN has organized anything for children who have lost their parents, but nothing has been set up yet. I think all orphaned children are probably still in the care of neighbours, relatives or strangers," she says.

The catastrophe has only strengthened Wallace's resolve eventually to open an orphanage.

Her family is proud of her activities under such dire conditions.

Her older sister, Yvonne, says, "People are reading the news and they're reading about mass graves and dead bodies and it seems so hopeless. Today Sarah and her friends fed 200 people rice ... She has been making a difference in small ways."

For all that Sarah has done, and continues to do, in "small ways," she is, most definitely, our: 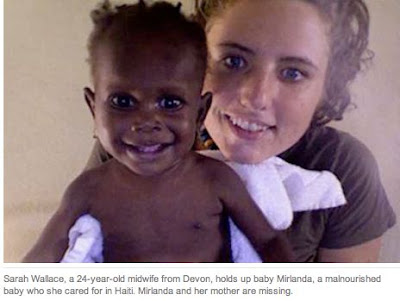 Find out more about Sarah's work at OLIVE TREE PROJECTS.

If you feel we ought to do something as a community
to help Sarah financially, let me know.