A monastery in the UK has come under fire after wine it makes has been linked to around 5000 incidences of crime in Scotland in recent years. The tonic wine Buckfast has been mentioned in thousands of crime reports by Scottish police in the past three years, including 114 cases of the bottle being used as a weapon, the BBC reported.

Nicknamed Buckie, a standard bottle of the popular drink is 15 percent proof and contains more caffeine than eight cans of Coca-Cola. But despite widespread condemnation, including from a Scottish bishop, the monks who make the tonic wine have denied any responsibility for the anti-social behaviour it has been linked to.

"What sort of moral double-take is there that these monks can be so closely associated with that product and knowingly aware of the social damage as well as the medical damage it is doing to the kids who take it in such vast volumes?" he said.

"St Benedict, I would have thought, would have been very, very unhappy with what his monks are doing nowadays."

Though produced in southern England, Scottish drinkers purchase A$88,000 a day of Buckfast. More than half of reported litter in Scottish housing estates are broken bottles of the tonic wine.

The monastery-made drink also goes by nicknames such as Wreck the Hoose Juice, Commotion Lotion, Bottle of beat the wife and Brewed by Monks for Drunks.

The Buckfast Abbey has been producing the drink since it was introduced by French monks in the 1890s.

COMMENT: Yes. But on the other hand it's great for ecumenism. In fact, it's the only thing that unites the Prots and the Catholics in Scotland. 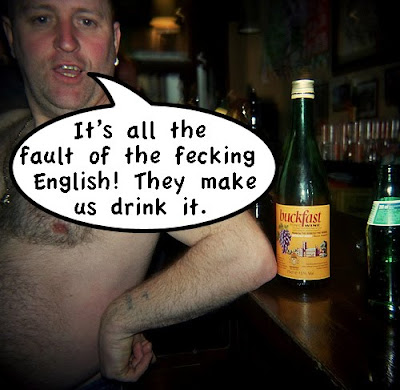