Primate of the Church of Nigeria (Anglican Communion), Peter Akinola, at the weekend in Akure said a non-violent revolution is the only solution to the constitutional crisis created by the ill-health of President Umaru Yar’Adua. Speaking after the inauguration of the Diocese of Ido-Ani in Ondo State and the enthronement of Ezekiel Dahunsi as the new Bishop on Sunday, he said the “powers that be” in the country have made nonsense of the nation’s constitution because of their selfish interest.

“I am in support of the call. Nigerians are a very docile people and have been so manipulated over the years by the leaders; hence things are getting worse every passing day,” he said.

He urged Nigerians to wake up from their slumber, saying, “I think that one day, these people who are so docile and have been so manipulated, will wake up and say, we have suffered enough and resist the injustice in a non violent way.” Mr. Akinola said violence will only make things worse, adding that “whatever the people can do constitutionally as a nation with the fear of God, the Anglican mission will welcome it as a church. Such a peaceful revolution is not planned or programmed. It will be a spontaneous reaction.”

Earlier in his sermon, Bishop of the Etsako Diocese of the Church in Edo State, Jacob Bada accused past and present leaders of being the architect of the nation’s misfortune.

“Our leaders are the enemies of this country,” he said. “They are too selfish. The major problem with our country is leadership,” he said.

COMMENT: Well, Jacob has hit the nail on the head with
that last point, at least. 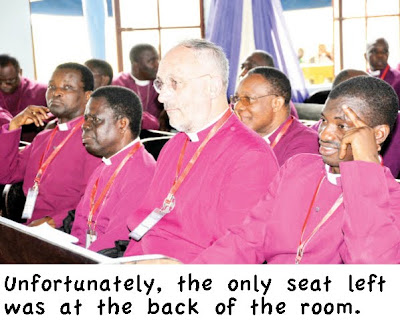