Pope Benedict XVI defended his decision to invite disaffected Anglicans to join the Catholic Church en masse, saying Friday it was the "ultimate aim" of ecumenism.

Benedict told members of the Vatican's Congregation for the Doctrine of the Faith that the invitation wasn't an attack on the church's reunification efforts with other Christians but was rather designed to help them by bringing about "full and visible communion."

Of course, that's just spin. But you have to hand it to benny, he's not afraid to state his true intentions even when he is trying to sweeten the pill.

From THE CATHOLIC NEWS AGENCY:

In an address to members Plenary Assembly of the Congregation for the Doctrine of the Faith at noon on Friday Pope Benedict XVI spoke of the unity he wishes to see in the Catholic Church. He expressed his hope for "full communion" with the Society of St. Pius X and the adherence of Anglicans "to the truth received from Christ."

"Unity is first and foremost the unity of faith, upheld by the sacred tradition of which Peter's Successor is the primary custodian and defender," said the Pope to the dicastery's President Cardinal Willia Joseph Levada, and the other members present.

"The Bishop of Rome," with the participation of the Congregation, must always proclaim "Dominus Iesus, Jesus is Lord," said Pope Benedict, who explained that he does this "so that the Truth that is Christ continues to shine forth in all its grandeur and resound for all men in his integrity and purity, so that there may be a single flock, gathered around a single Shepherd."

Therefore, he added, the goal of a "common witness of faith of all Christians constitutes ... the priority of the Church of all periods of history, with the purpose of guiding all men to encounter God."

And, as usual, the women just tag along, I suppose, along with the rest of the man's household and chattel. Ah, we live in such enlightened times (not). 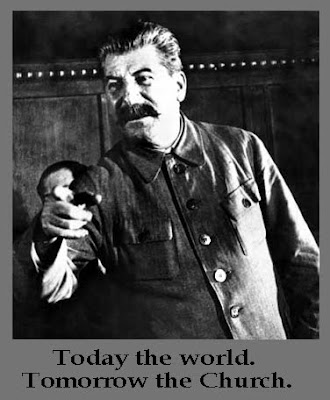