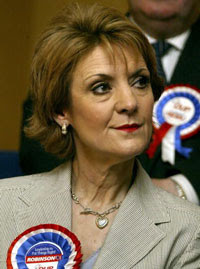 n June 2008, shortly after a homophobic attack (involving physical assault) on a gay man in Northern Ireland, she made comments on the BBC Radio Ulster's Stephen Nolan Show offering to recommend homosexuals to psychiatric counselling. While condemning the attack, she claimed that homosexuality was an "abomination" and it made her feel "sick" and "nauseous", and offered to refer homosexuals to a psychiatrist she knew. In a subsequent interview Mrs Robinson defended her views and denied prejudice against LGBT people, saying that "just as a murderer can be redeemed by the blood of Christ, so can a homosexual.... If anyone takes issue, they're taking issue with the word of God".

Robinson again repeated her view in the Northern Ireland Assembly on 30 June 2008 when questioned by Health Minister Michael McGimpsey in a discussion about "LGBT Groups: Mental-Health Needs". Speaking in a Northern Ireland Grand Committee session on Risk Assessment and Management of Sex Offenders, she said: "There can be no viler act, apart from homosexuality and sodomy, than sexually abusing innocent children"

The lover of DUP MP Iris Robinson was aged 19 at the time of their affair, the BBC can reveal. She was 59. 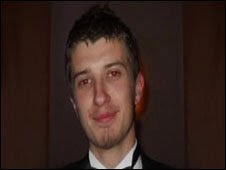 Kirk McCambley is now 21. He is the proprietor of the Lock Keepers Inn, a cafe on the banks of the river Lagan in south Belfast.

Mrs Robinson said she had encouraged friends to invest in Mr McCambley's business. Castlereagh Borough Council, on which Mrs Robinson sits, built the visitors centre which houses the cafe.

COMMENT:
I'm shocked, I tell you.
What an abomination!!!