From this side of the Atlantic it would appear that the Americans have the same problem with churches called "Good Shepherd" as we have with churches called "Holy Trinity." I expect the reason is the same. They were usually founded by militant evangelicals who hated the idea of calling their church after a saint because, of course, that would be papist. These churches started off as defining themselves by what they were against and many have continued to do so up until the present day. Of course, they have evolved. Over the years they have discovered lots more things to be against. It's a good time for being a hater in the Anglican Communion.

A former Episcopal priest in suburban Philadelphia who lost a legal battle with his bishop has filed a malpractice suit against the attorney who represented him in the case. David Moyer of the Church of the Good Shepherd in Rosemont -- who has spoken out against liberal trends in the Episcopal Church -- was removed from the priesthood in 2002 by Bishop Charles Bennison Jr. In October, a Montgomery County jury ruled that Bennison did not act fraudulently.

Moyer and his church have now filed suit against attorney John Lewis seeking millions in compensation for the costs of the trial and alleged damage to the reputations of the ex-priest and the parish.

Lewis -- a member of Good Shepherd for 10 years who said he considered Moyer "my friend" -- denied the accusations and estimated he had done $700,000 worth of legal work at no charge in Moyer's case against the bishop. Lewis and his law firm are countersuing Moyer and the parish. 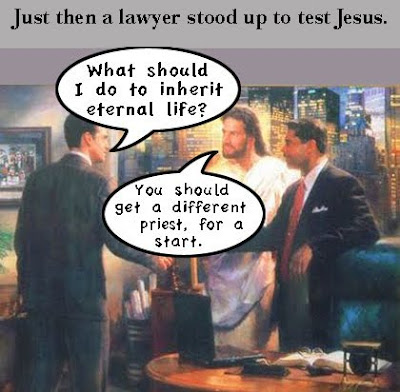