Yours truly and Mrs MadPriest finally got round to watching the conclusion of the Christmas "Doctor Who" this evening. The episode in which we said goodbye to David Tennant.

There were tears in our eyes as the gorgeous David shapeshifted into some gormless buffoon whose looks will probably appeal to thirteen year old girls but nobody else.

MadPriest: I've just worked out why the last two incarnations of Doctor Who have been so popular to people of all ages.

MadPriest: Who chose the actors to play the Doctor, and Captain Jack, and all the other main male characters but is no longer choosing the cast?

MadPriest: And what is Russell Davies?

MadPriest: Yes. But what else?

MadPriest muttered something about it not being a sexual thing and got one of those looks from Mrs MadPriest. We both then settled down into a sullen despondency to mourn the end of an era. Goodbye Doctor.

The new producer, Steven Moffat, is well into women. Dammit! 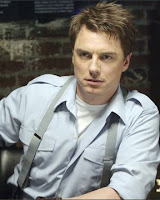