↓
Home Menu ↓
Skip to primary content
Skip to secondary content
I have never written to my member of parliament before but today I did.
This is the email I sent him:
Dear Mr Jones
I am contacting you about an infringement of my civil liberties.
The staff at my local post office refuses to send my parcels unless I tell them exactly what is in each parcel. This means that not only they but also the people behind me in the queue know what I am sending. I have read the new restricted goods leaflet and I am quite happy to swear to them that there are no restricted goods in the parcels. In any case a dishonest person would just lie when asked. So, in fact, they do not know what is being sent. Therefore, this new practice is an attack on my right to privacy and also completely illogical and useless.
I realise that you have to fill in a customs form to send something abroad. That is fair enough because what can be imported varies from country to country and many other countries do not have the same level of civil liberties that we have in the UK. That is their prerogative and misfortune. But I live in the UK and I am referring only to items to be sent to addresses in the UK.
I feel very strongly about this and will take it further. However, as a life long labour voter in your constituency and a believer in parliamentary democracy I would be happier if you would attempt to sort this matter out for me and all the others who are complaining about it all over the internet. I have a strong suspicion that this is a decision made by a busy body jobsworth in a non-governmental body and that it is not actually in accordance with the law. If I am right I think Parliament should step in to put them straight. If I am wrong I think it is a bad law that is against the traditions of the British Constitution and should be changed.
I think what annoys me most about this new intrusive post office policy is its complete uselessness. How anyone earning the sort of money that a person in a position to make such a pronouncement makes could believe for one nanosecond that asking a person what is in a parcel will stop the sending of malicious goods through the post is beyond me. I doubt that I will get a helpful reply from Kevan Jones MP. But if a miracle happens and I do, I will let you see it. 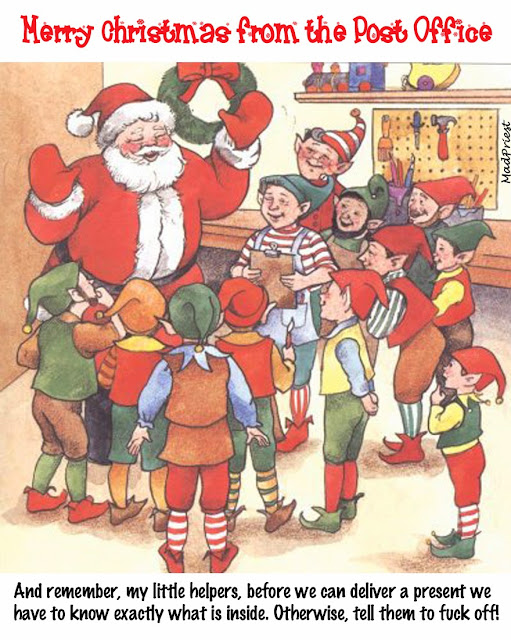