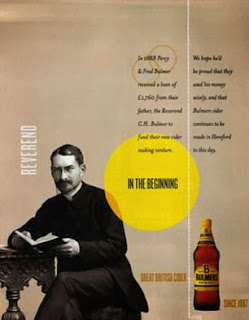 From THE MAIL:
Executives at cider brand Bulmers have admitted that they blundered by advertising the drink with a picture of a teetotal Victorian vicar who campaigned against alcohol. The Hereford-based drinksmaker thought it had found a photograph of Reverend CH Bulmer, who gave his sons the money to start up the business 120 years ago. Next to the black and white picture was the slogan: "We hope he'd be proud."
But the man in the picture, had he known what it was being used for, would almost certainly not have been proud. It turns out the photograph was of Hugh Price-Hughes, a Methodist clergyman, who devoted his life to helping alcoholics.
The mistake was spotted after Heineken, who own Bulmers, spent tens of thousands of pounds on the advertising campaign. But after the Advertising Standards Authority was told of the blunder the company scrapped the advertisements and posters.