From THE SALT LAKE TRIBUNE:

On Dec. 16, 2012, hundreds of Mormon women strolled into their weekly LDS services wearing trousers instead of the typical skirts, and now 81 pairs of those trousers — plus 53 purple ties, shirts or other items men and children wore in support of the women — have been made into a quilt.

The symbolic effort, known as "Wear Pants to Church Day," was the brainchild of Utahn Stephanie Lauritzen, who said at the time she "wanted to do something that would be a sign of solidarity and visibility for those Mormon women who don’t feel included or accepted in the church."

The simple gesture garnered national headlines, including in The New York Times, and prompted an American historian to suggest that the Smithsonian might want to memorialize the feminist effort by showcasing Lauritzen’s pants. Instead, the group sent out a call for participants to send the clothes they wore that day to Nikki Hunter, who would use them to make a quilt. Hunter, a longtime quilter in Emmett, Idaho, originally thought she would make a more traditional patchwork quilt, with squares and triangles of the fabrics. But she quickly realized she would get a lot of black, gray, tan and purple — women were, after all, wearing dress slacks — and that wouldn’t be a very colorful showpiece.

One Sunday night — after receiving all the clothes from 21 states, two Canadian provinces, England and Australia — she saw in a dream a sunrise coming through the trees.

"When I woke up, I knew what it needed to look like," Hunter said Tuesday. "I made the whole thing as an appliqué, which I had never done before. It came together without a lot of tears and mistakes; I really felt kind of guided."

The quilt, titled "Sunday Morning," depicts a group of dark-hued trees, growing beside a road and hills, set against a purple sky and rising sun.

No word yet on whether the showcase Washington, D.C., museum is interested. 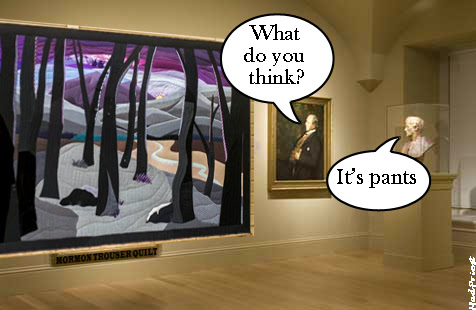