All politicians soon become experts in ways to avoid answering questions where a truthful answer will not be to their political advantage or might show them up to be liars/incompetent/completely ignorant of what is going on etc. Usually the method employed is that of answering a completely different question to that which they have been asked by the interviewer, of their own devising and which allows them to say how much better they have done than that last lot.

But Alex Salmond, the sort of prime minister of Scotland and leader of the Scottish National Party, has his own unique and particularly infuriating method of not saying anything for the entire length of any interview he finds himself doing. He just stares at the interviewer and says that he will not be commenting on whatever the interviewer has asked him to comment on. His interview with the BBC yesterday which was supposed to be about the industrial unrest at the Grangemouth refinery, was one of the most accomplished acts of obscurification that I've ever witnessed a politician achieve. Once again I found myself wondering what on earth the Scots are hoping to gain from becoming independent. One thing is for certain it won't be a new, open style of government. 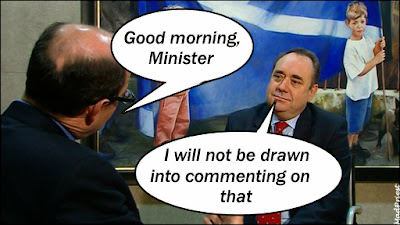