I have believed Saint Francis to be gay for a long time. I base this assumption on the fact that much is written about his misspent youth, his carousing and drinking and getting into trouble. But there is absolutely no mention of any womanising whatsoever. He was a young Italian male for goodness sake! If he was carousing he would have most definitely have been womanising as well and that would have been mentioned by his biographers who wanted to emphasise his naughtiness before his conversion. The fact that there is no mention of Francis chasing young women must mean that he didn't. And for a young, rich Italian man there would be only one reason for that.

Of course, the real clue about his gender is in his title. Saint Francis of ASISSI - I mean, I ask you, could he have made it plainer? 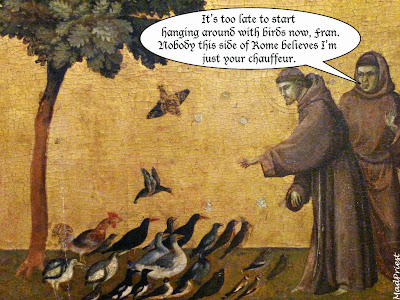