At the beginning of July I went to see a bishop in a far away diocese following an introduction from an online priest friend of mine. I drove about 300 miles and spent a good one hundred pounds on the enterprise. There was a part time job sort of in the mix but the real reason I went was to ask the bishop, as I had been assured he was a good man who cared for his priests, to help me become reconciled to the Church again. I explained this to him in great deal when we met. I told him how and how much I had been hurt by my former bishop's treatment of me following my recovery from depression (well over ten years ago now). He said he would think about it.

If I had been the man who fell among thieves I would have been long dead if I had relied on this good samaritan to help me because I have only just received his reply.

He tells me in a letter I received today that he is not "in a position to entertain your coming to the Diocese."

This, he goes on to say, is a gut reaction based on his belief that I will bring too much baggage with me. He says that he came to this conclusion because I asked him for help get over the hurt at the end of our conversation.

I think if anything illustrates the true nature of the Christian church this is it. I emphasise that I did not ask for a job primarily, I asked for help and a way back into my vocation. But because I have been hurt and I am open about this and what I need for the hurt to be made well this bishop (one of the best I am told) is unable to help me get over the hurt. If I made no fuss about my hurt, even better, proclaimed my hurt was all my fault, no doubt he would have been far more helpful. He might even have offered me a post. Obviously he thinks my hurt is contagious and might infect his membership and that it would be better for me to remain quarantined in isolation than for him to try and cure my soul. This attitude would be bad enough if I was a member of the laity looking for pastoral help. The fact that I am a priest who gave up everything I had to train and become a priest, mostly at my own expense, is, in my view, an obscene dereliction of the calling of a shepherd.

This bishop was not from the Church of England but from one of the provinces known for being less bureaucratic and hierarchical, more human in its dealings with its people. Therefore, this does appear to really be the end of the road for me. If I can't get help from the good guys I might as well give in. I want nothing else in life but to follow my calling so the end of the road is exactly that. This in itself is extremely depressing but there is also, as always, a big question raised my my ongoing rejection and the pain that goes with it. Where the fuck is God in all this? He's obviously not in his church and I cannot even find him among his people. 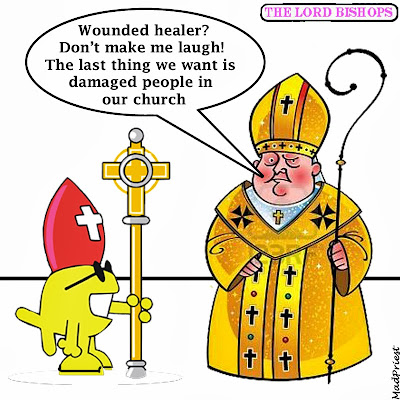