Yesterday the MadGang went to an obedience dog show near Carlisle. In obedience competitions in the UK there are six levels of difficulty. Over the passed eight years Mrs MP and Delphi have steadily climbed their way to the top class. Yesterday they won that class which basically means that out of hundreds of dogs, Delphi was the best in show. Mrs MP is one happy lady. It was the best consolation for missing out on two promotions at work (that she was robbed of) in the last month that she could have hoped for. She even said she would much rather have won with Delphi than have got the jobs and she is not one to exaggerate.

So that I did not distract Delphi I took the following photos at quite a distance with just my basic pocket camera and then blew them up considerably on my computer. As my camera does not boast many pixels the results are a bit blurry. 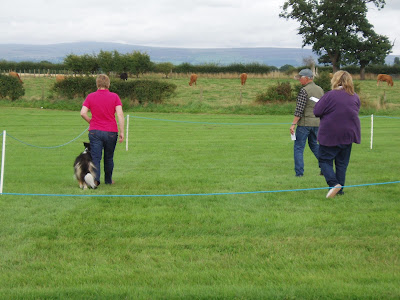