"Doing the work of a bishop is a beautiful thing. It's beautiful. The problem is when a person seeks that job. This is not so nice. This is not of the Lord. But when the Lord calls a priest to become bishop, this is beautiful." (Pope Francis)

One thing is for certain, Pope Francis fully understands what the message of Christ is about. As someone who has been suspicious and cynical for a long while about anyone in any position of power in any denomination of any faith my default position is to believe that any pope's (any bishop's in fact) proclamation of the gospel is lip service only. Certainly that was my view of Pope Francis when he first started acting like a real servant of the servants of Christ. But I have to admit he's winning me over. It is hardly just lip service if you are prepared to die for what you profess aloud and Francis is constantly putting himself in danger rather than distancing himself from the people he claims to love.

Reading through this transcript I noticed that the Pope avoided being drawn on controversial subjects whilst previous popes would have been eager to loudly defend existing conservative dogmas. Maybe this is a step in the right direction. May be we have among us a pope who is truly a good man albeit a good man trained in the art of clerical diplomacy.

There have been two other popes in the last 50 years or so who have called for major reform in the Church of Rome. One of them changed the world into a better place and one of them mysteriously died after less than a month in the job. So, you can't blame Francis for keeping his cards to his chest. It doesn't matter how holy a pontiff is. He is no use whatsoever if he is lying in a coffin whilst the cardinals meet to elect someone who won't be rocking the boat with talk about the poor, humility and Jesus Christ. 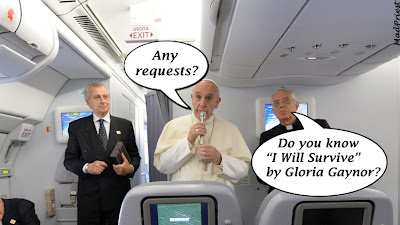