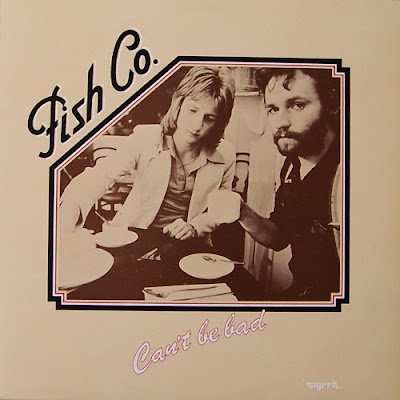 I'm going to stick my neck out and state that the best ever Jesus Movement record was the debut album by the British group, Fish Co, entitled "Can't Be Bad," released back in 1975. I reckon it was better even than "Light Up The Fire" by Parchment which, in turn, was much better than anything that came out of the USA where the scene was born. Ironically, Fish Co achieved their number one status on my list by getting the West Coast sound of the era spot on. Check out the opening track and I am sure that you will be reminded of the secular group, Hall and Oates.

I bought the album at the Greenbelt Festival of 1975 which is where I also saw the band perform for the first time. Over the following years I saw them at subsequent Greenbelt Festivals and also at various pubs around London. When they morphed into Writz in the early 80s I even saw them at the Music Machine, Camden, a major venue at the time. I got to know the two Steves to talk to. I think they were quite flattered by the fact I would travel 70 miles, there and back, to watch them perform at The Swan at Hammersmith and other less than salubrious bars.

Steve Fairnie looked like a star as did his wife, Bev. He really tried to become a star. We all thought he would. But although he became a well respected personality around town he never did make it to the top in his own right. He died in his early forties from an asthma attack.

I was never happier than I was under the stars at those early Greenbelts. I wish I had the ability to look back and feel that happiness. Unfortunately, when I remember I feel sad because it is a lost happiness. A happiness that has been destroyed by the subsequent sadnesses of my adult life. I used to dream of one day appearing on the Greenbelt main stage. But although I have blogging friends who ended up being invited to speak at Greenbelt I never was. The festival was responsible in part in making me the misfit Christian I am today but now it is just another place where I wouldn't quite fit in.

Anyway, here's the album. Give it a listen. It's very short. Records were back then. And probably all the better for that.

Hey, look, I'm only semi-omnipotent and it is possible I might be wrong. If you think there is a better Christian record than this then let me know. I don't mean celebrity Christian records like the stuff by U2 and the like. I'm talking about records from the sub-culture released on Christian labels.