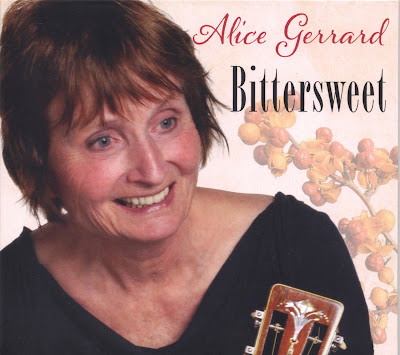 The last time Alice Gerrard released a solo album was back in 2004 and to be able to record her new album, "Bittersweet," she had to ask her fans and supporters to sub her the cash needed upfront. To those people who did send her the dosh the world owes eternal gratitude because this is one mighty fine album. And it is a new venture for Alice as, although she has featured one or two of her own songs on albums previously, all thirteen songs on this album are her own compositions.

She says, "“I finally decided now that I’m an old woman, it was time to do a complete album in my own voice - my songs.”

Alice has been an advocate of real American roots music for most of her life and so it comes as no surprise that "Bittersweet" simply reeks of authenticity. For sure this is an elderly lady singing but for sure she still has plenty to say.

With the exception of a couple of uptempo tunes the music on this album is as described on the wrapper - bittersweet. I thoroughly recommend it to those of you who like their country raw and, above all, real. (MadPriest)

Alice Gerrard (b. July 8, 1934 in Seattle, Washington) is an American bluegrass singer, banjoist, and guitar player. She performed in a duo with Hazel Dickens and as part of The Back Creek Buddies with Matokie Slaughter. Trained in piano, Gerrard attended Antioch College where she was exposed to folk music. After graduating, she moved to Washington D.C. and became part of the thriving bluegrass scene there. Gerrard was married to Jeremy Foster who died in a car accident. She had four children by him. She was later married to Mike Seeger and recorded two albums with him until they divorced. The Alice Gerrard Collection (1954-2000) is located in the Southern Folklife Collection of the Wilson Library of the University of North Carolina at Chapel Hill. (Wikipedia)