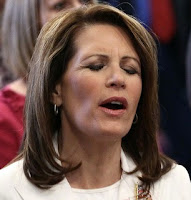 A conservative Christian political consulting firm nearly gifted Minnesota Congresswoman Michele Bachmann (Republican) with a vibrator, according to court documents obtained by BuzzFeed. The CEO of Strategy Group for Media, Rex Elsass, reportedly sent “female pleasure machines” to Bachmann by accident. In hopes of helping with her migraines, Elsass intended to purchase an electronic head massager for the conservative congresswoman. He sent an employee off to buy the device, but the employee purchased something a bit different and mailed it to Bachmann. Sources familiar with the incident told BuzzFeed that the Christian group intercepted the gift before Bachmann was able to open it.

I'd suggest that they just send her a pack of aspirins for her headaches. But they would probably end up sending her viagra.