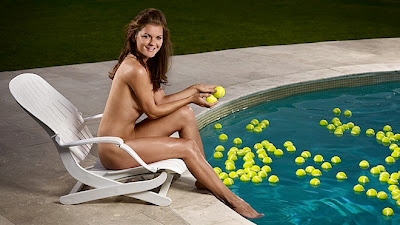 The world's number four female tennis player, Agnieszka Radwanska has been dropped by the Roman Catholic group, Youth Crusade, in her native Poland after posing nude for ESPN The Magazine’s Body Issue. The Polish player, who made the semifinals of Wimbledon this month, was an ambassador for the group’s campaign, “I’m not ashamed of Jesus.” In 2011, she posed for a picture with the Polish spelling of Jesus written in tennis balls. They have now sacked her for “immoral behavior.” 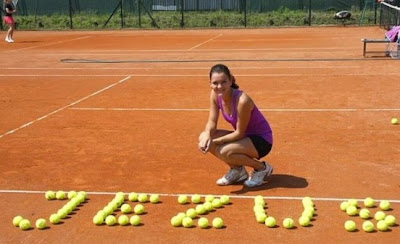 “It’s a shame that someone who has declared their love for Jesus is now promoting the mentality of men looking at a woman as a thing rather than a child of God worthy of respect and love,” said Father Marek Dziewiecki, a senior Catholic priest. “If she meets a man who she can truly love and establish a happy family and raise Catholic children, then she would probably have to hide these pictures from relatives.”

Oh, I don't know. She looks very much like a woman, created by a really cool God, and not just a thing to me and this photo could lead to a massive increase in the number of men coming forward to undergo full immersion baptisms, especially at Agnieszka's church. I bet Mark is trying to twist Mrs Driscoll's arm this very minute.

One thing I notice which I find interesting is that when she takes her clothes off she obviously loses her ability to spell "Jesus." Mind you, she made a typo writing it when she had her clothes on.