Papal envoys can be so bad mannered. You graciously allow them into your country and the next thing you know they're instructing their local agents to bring about the overthrow of your democratically elected governments. Who on earth do they think they are - the Egyptian military?!

The following is taken from a "homily" given by Cardinal Raymond Burke whilst visiting Ireland for a liturgy conference recently. It can be read in full at EWTN NEWS.

Justice founded on obedience to the promptings of the Holy Spirit, first of all, safeguards and defends the inviolability of innocent human life from the moment of conception to the moment of natural death, and the integrity of the faithful and indissoluble union of man and woman in marriage through which spouses, in cooperation with God, create and nurture new human life. Yet, the governments of so-called free nations dare more and more to compel individuals and institutions entrusted with the stewardship of life and the family to violate the most sacred tenets of the conscience by cooperating in egregious violations of the natural moral law...

We see before our eyes the evil fruits of a society which pretends to take the place of God in making its laws and in giving its judgments, of a society in which those in power decide what is right and just, according to their desires and convenience, even at the cost of perpetrating mortal harm upon their innocent and defenseless neighbors. It is the kind of society which we have rightly deplored and against which we have so often fought at the greatest human and material cost. It is a society which has abandoned its Judeo-Christian foundations, and above all, the fundamental obedience to God's law which safeguards the good of all. It is a society which embraces a totalitarianism masking itself as the "hope," the "future," of a nation. Our faith, as Saint Paul has powerfully reminded us today, teaches us that such a society can only produce violence and death, and in the end destroy itself.

The situation, profoundly disturbing as it is, cannot be for us a cause of discouragement, let alone abandonment of the pursuit of the justice which comes from God and, therefore, serves the good of all without condition or boundary. Uniting ourselves to Christ in His Eucharistic Sacrifice, we accept not only our portion of His suffering for the sake of justice but are also filled with confidence in His victory over sin and the forces of evil. Praying for the outpouring of the Holy Spirit upon the leaders of our society from the glorious pierced Heart of Jesus, from His Eucharistic Heart, we must be completely honest about what justice demands of them in our time, even engaging in public demonstrations, in order that the voice of truth be heard in our society.

So there you have it. We might, as cynical citizens, believe that our governments are made up of self-seeking idiots who couldn't run a piss-up in the Guinness Brewery, but it appears that it is much worse than we thought. They are in fact, forces of evil in league with the devil and intent on bringing about "violence and death." Cardinal Burke, speaking for the Roman Catholic Curia, is, whilst the guest of a "first world" democracy, calling "first world" democracies the antichrist or, to put it more prosaically, the "Great Satan." In fact, I can see little difference between the arrogance and attitude of Burke and the arrogance and attitude of the hate preachers of extremist Islam. Perhaps Ireland should take a leaf out of the British government's book and deport him to a nation in which he has some outstanding questions to answer in respect of a real crime against humanity. 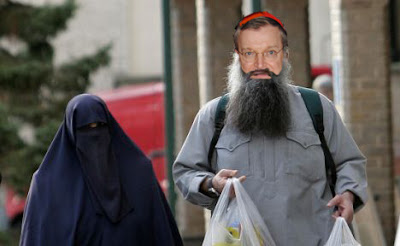