Personally, I married Mrs MP, twenty five years ago this month, because I loved her, which, by the way, I still do. Our decision to legally commit ourselves to each other for the rest of our lives was not in the least contingent on the continued oppression in our country of women and men who happened to find people of their own sex attractive. To be honest, the  issue of homosexuality just didn't cross our minds. We were being far too energetic in the heterosexual department to give a thought to what two blokes, we didn't even know, might be getting up.

It has now been brought to our attention, by none other than the Archbishop of Canterbury himself, that we were being incredibly naive. Evidently the happiness of straight people is in complete correlation to the unhappiness of gay people and, as there are more of us straight people than there are gay people, me and the wife should have been dedicating a lot of our married life together to making sure that gay people remained unhappy at all times rather than just selfishly getting on with our own lives and minding our own business.

I am now very worried that our days together as a couple are numbered. Traditional marriage (one man, one woman) with all that it brings (a high divorce rate, single parent families, latch key kids,  at mum's during the week and with dad at the weekend) has held the MadPriest's own marriage together for two and a half decades. It seems such a shame that we are going to have to initiate divorce proceedings against each other the day after the act of parliament is passed that will allow people of the same gender to marry each other.

What is far more worrying than the fact that my marriage appears doomed is the fact, as pointed out to the world by a former Archbishop of Canterbury within the last few days, that after I have divorced Mrs MP I will not be able to stop myself marrying multiple wives. Now, don't take this the wrong way, I love Mrs MP with all my heart, soul and mind, but one is enough. And I'm sure she feels exactly the same about having to put up with multiple husbands. You know, I am so frightened by this prospect that if polygamy becomes compulsory for straight people I may well switch my allegiance, so to speak. Does anybody know any good ex-straight therapists? 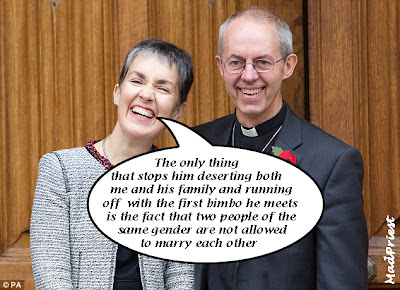