Unlike Bill Maher, who recently quipped that Pope Francis might be an atheist because of his inclusive attitude towards atheists and the fact that he (Maher) has met a lot of secretly atheist priests in his life, I have come to the reluctant conclusion that the Pope is a Christian. In fact, he may well be the first Christian leader that any mainstream denomination has had leading them for a very long time. Due to his enthusiastic political opposition to gay marriage in Argentina back when he was just a cardinal, I had assumed that his initial acts of blatant Christianity on becoming the bishop of Rome were just part of a cynical PR campaign and that we would soon see his "real self" furthering the Roman Catholic Church's main campaign of recent years, to take their denomination (and as much of the rest of the world as possible) back to the Middle Ages or, at the very least, back to before Vatican II. His apparent approval of the institutional and patriarchal bullying of the Roman Catholic female religious in the USA seemed to indicate that a return to chauvinist normality was going to be very quick indeed. However, since then things have not gone how I was predicting in the slightest. The man keeps acting and talking like Jesus Christ and, unless he fesses up to it all being a big joke very soon, Christ centred Christians are going to have to accept that we are no longer dealing with a corrupt leadership which puts its own agenda before the agenda of Jesus Christ and alter how we campaign for change accordingly.

It is much easier to fight a bad person who is wrong about something than it is to fight a good person who is wrong about something. We knew that Benedict was a bad egg. We had all his history as the Evil Ratzinger to show us clearly who he really was and during his time as CEO he never once did or said anything that would lead anyone to conclude that he had changed his views on anything of any substance. It was actually too damn easy to lampoon the man and we could get away with stating that he was wrong about any issue simply because he was Pope Ratzinger, formerly of the Nazi Youth. Of course, Benedict was against gay marriage, female priests and family planning - someone like him is always going to be.

Today I read the following:

At his private Mass in the chapel at his residence Saturday, Pope Francis commented on the Gospel of Mark where Christ rebukes the disciples for preventing the little children from coming to Him. (Mark 10: 13-16)

The Vatican newspaper L’Osservatore Romano reports that the Pope mentioned the example of an unwed mother coming to Church to ask for baptism for her child to exemplify the error of allowing protocol to distance people from the Lord.

The paper quotes the Pope:

A girl-mother goes to the parish to ask for Baptism for her child and hears “a Christian” say, “No, you can't have it, you’re not married.”

“Look at this girl who had had the courage to carry her pregnancy to term” and not to have an abortion. “What does she find? A closed door,” as do so many. “This is not good pastoral zeal, it distances people from the Lord and does not open doors. So when we take this path...we are not doing good to people, the People of God.” Jesus “instituted seven sacraments, and with this approach we institute the eighth, the sacrament of the pastoral customs office.”

Shit. I think he's got it. He is putting Christ before everything else and without any fear of the consequences or worry about political diplomacy whatsoever. This means we are now dealing with a man who is against some things we are in favour of, not because he is just a nasty, old, power hungry conservative, but for other more complex, less predictable reasons. This is going to make the fight for certain equalities and just actions very difficult indeed. People may have believed what Benedict said because he was the pope but nobody believed him because he was a good man. People are going to believe what Francis says because he is a good man, probably of the highest order. How on earth do we combat that without resorting to dishonesty and false representation?

But, fool that I am, I have hope. Personally, I have never come across a person who deliberately and consistently tries to think like Jesus who has not ended up completely ditching all party whips (usually at enormous social cost to themselves) to take a radical loving attitude towards all people. Unwed mothers today, wed lesbians and gay men tomorrow maybe. Commentators have been generally insistent that the Roman Catholic Church is a monolith that moves extremely slowly no matter who is pushing it. But this is simply not true. The Roman Catholic Church is a monolith that remains solid and unmoving most of the time but which moves extremely quickly on those rare occasions when the right person, at the right time, comes along, sticks a couple of megaton of reformist dynamite under it and lights the fuse. Francis could be such a person and he could change his mind or, more likely, reveal his true feelings, about certain previously intractable dogmas. Those of us who would love this to happen need to take a leaf out of the new pope's book and make like Jesus - praying that our Father's will be done and that all God's children will be free one day soon. 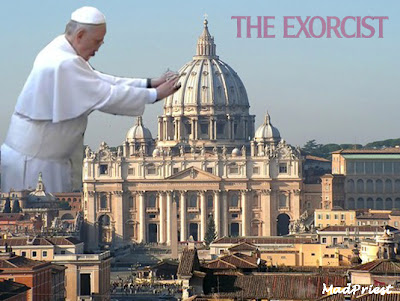