For being a member of a Masonic lodge, a Catholic priest at the posh French ski station of Megeve has been stripped of his functions at the request of the Vatican. Father Pascal Vesin of the Sainte-Anne d'Arly-Montjoie parish was ordered by the bishop of Annecy, Yves Boivineau, to halt his functions due to his "active membership" of the Grand Orient de France. A statement from the parish said the move had been "made at Rome's request." The bishop had asked Vesin earlier to forsake Freemasonry, which he had refused to do. 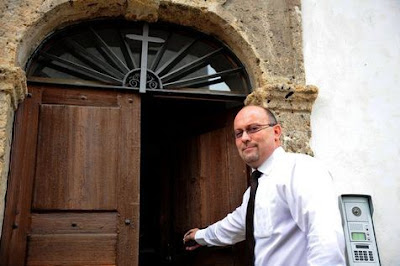 The real reason why the Roman Catholic Church, The Church of England and others are so against Freemasonry is because it has been the single most effective agent of social and political change in the world ever, actually delivering where Christianity has failed miserably due to the wealth and power seeking desires of so many of its leaders. Masonry has been anti-clerical but for exactly the same reasons as Jesus Christ was anti-clerical which was basically because he despised the hypocrisy, elitism and authoritarianism of the clerics at the top.

I am not, and I have never been a Freemason. I fully accept that it has had many bad apples within its ranks over the years. But I am also eternally grateful to it. Without Freemasonry I would be a peasant working for gruel for the descendants of the Norman aristocracy. Therefore, I would never condemn any Christian for being a member of a lodge. Mind you, to really get my respect, Freemasonry should go back to allowing female members like it did in many of its European lodges when it started.