A trial began this month for the death of a boy who, in 2011, was sent to a South African boot camp where boys were supposed to become men—especially effeminate boys or boys who were thought to be gay. Photos of his emaciated body in the hospital bed look like the body of a Nazi death camp victim.

Fifteen-year-old Raymond Buys was not the first boy to die at this camp. Two others in earlier episodes died at the hands of the camp leaders who are affiliated with white supremacist groups. Camp leaders attributed the previous deaths to heart attacks but autopsies revealed choking in one victim and dehydration, broken bones, and brain hemorrhaging in the other.

Raymond’s roommate from his camp days said that Raymond had been chained to his bed for extended periods and left in his own soil. Tortures included being forced to eat his own feces and camp leaders put a pillowcase over his head and used an electric cattle prod on his fragile body. When he arrived at the hospital he had multiple burns, his bones were broken, and he was starved and dehydrated. He died.

I've said it before and I will continue to say it until the last homophobe leaves the building - every bishop, every member of the clergy, every lay person who has voted against full equality for LGBT people is responsible for deaths like these. Every prime minister, every MP, everybody who has voted UKIP or for any other bigoted parliamentary candidate is responsible for deaths like these. Every psychiatrist, every counsellor, every self-deluding gay person who claims that sexuality is a desease or mindset that can be cured or changed is responsible for deaths like these. And there have been thousands upon thousands of them over the years. Christians who say and do nothing to stop the injustice and violence that gay people routinely endure are to gay people what the German Christians were to Jews. Hyperbole? No, I'm being kind. 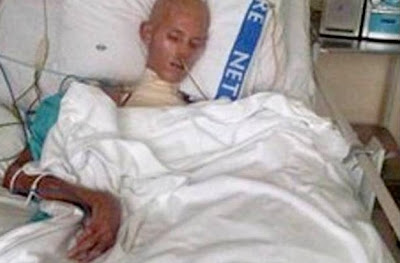