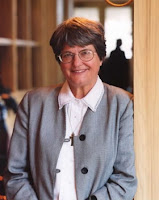 Sister Helen Prejean, the author of “Dead Man Walking: An Eyewitness Account of the Death Penalty in the United States" (published 1993) has been awarded the Robert M. Holstein Faith That Does Justice Award from the Ignatian Solidarity Network. The award is given each year to a person “who has demonstrated a significant commitment to leadership for social justice grounded in the spirituality of St. Ignatius of Loyola, the founder of the Society of Jesus.” Sister Helen is the first woman to receive the award and the first non-Jesuit.

For two decades, Sister Helen has traveled around the world, speaking against capital punishment. She tells audiences about being a spiritual adviser to inmates on death row and talks about what it means to accompany a man to his death. She tells of meeting the families of the condemned men and the families of their victims. She talks about how the court system works, and how it doesn’t. She speaks of forgiveness.

She calls her passion to end the death penalty “a journey that’s still happening.”

I read an article recently in which the death penalty was referred to as "state sanctioned euthanasia." I have to hand it to the Roman Catholics, they are consistent on this being against both euthanasia and the death penalty. The same cannot be said of other Christians. How a person can condemn euthanasia and abortion whilst still supporting the death penalty is beyond me. How a person who condemns torture but condones a system where a person will spend decades on death row waiting for their execution is beyond me. How a person can be happy about the millions of pounds spent on the procedure of getting a prisoner from the court to the death chamber is beyond me. So, thank goodness there are people like Sister Helen in the world, slowly and gently changing the minds of the supporters of capital punishment. Go read more about her at THE NEWS STAR.