Last Sunday was the third anniversary of the last occasion at which I presided at holy communion. I told the congregation afterwards that it was probably the last time I would ever lead worship. At the time I only half believed that. Now, after three years of experiencing the closing of episcopal ranks against me, being banned from officiating and the complete refusal of anybody in the Church of England to believe in me or even simply to believe me, I think it may have been a true prophesy. However, hoping against hope, I continue to dream that one day I will be allowed to continue the ministry to which I have dedicated my life and for which I was chosen. Unfortunately, the longer I am unemployed the more unlikely it is that I will ever be employed again. People are naturally suspicious of a priest without a job. Nobody believes that a bishop could be in the wrong. Everyone believes that there is no smoke without fire. Most people, if only secretly, believe with the Bishop of Newcastle that a person who has suffered from depression can never be trusted to be in any position of responsibility within the Church.

There's an article in THE TELEGRAPH today about the Archbishop of Canterbury's daughter, Katherine's battle with depression. Unlike me, she appears to have received help and compassion from the Archbishop. Unlike me, her employers have continued to employ and have helped her use her experience of depression to campaign for all disabled people shunned by the Church out of ignorance and bigotry. Unlike me, who has been blogging for eight years about the prejudice within the church against those who are suffering or have suffered from mental health problems, Katherine is being listened to and will receive praise for her campaign rather than being swept under the carpet and deliberately ignored. Like father, like daughter, being a member of the "upper class" in my country still comes with incredible privilege and an access to the media nobody else enjoys unless they murder someone or sleep with a "celebrity." Hopefully, because of who she is, Katherine will succeed where so many others have failed and get the important people in the Church of England to actually do something positive and truly beneficial for the mentally ill rather than limiting themselves to signing worthless pieces of paper in front of press photographers and then going back to excluding the different from their churches.

As for me, I just want a job. Even a house for duty post might do. The problem is that as I haven't got permission to officiate, I am regarded as not being in good standing with my present diocese, even though I have never been disciplined for any wrongdoing. If you are not in good standing in your diocese you are simply not considered for a post by any other diocesan body. It's a no win situation and one that was deliberately engineered by people in the Church who wanted rid of me without going through the proper procedures which they knew would not condemn me. All the time they protected themselves by hiding behind the ridiculous exemption the government has given the Church from the employment legislation that forbids discrimination in the secular world. All their cries about freedom of religious belief are bogus. What they really want is to remain above the law, like medieval monarchs, so that they can do unto others exactly what they please.

Katherine Welby talks of thoughts of suicide. I don't need to kill myself. For all intents and purposes I died on a Sunday morning in May, three years ago at the Church of Saint Francis, High Heaton, Newcastle upon Tyne. No clergyperson was there when I died. Few have visited my grave since. None have the slightest desire to raise me from the dead. Yet still they celebrate Easter each year as if they actually cared. Infected with such gross hypocrisy no wonder the Church is also dying. The cause of its death will be suicide. 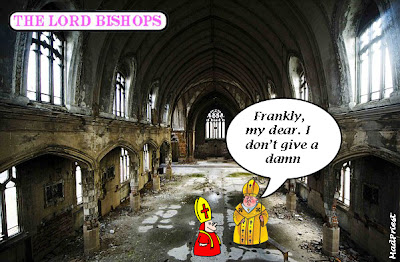