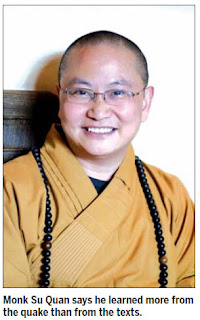 Monk Su Quan says he does not want the 108 children born in his temple after the quake to thank him by visiting.

"They can repay me by studying well and helping others."

Luohan Temple, with its low structures and open spaces, was transformed into an emergency maternity unit when the nearby children's hospital was threatened by aftershocks. There were about 1,500 other refugees. Some orthodox monks disapproved of the cesarean sections, as well as people eating meat on the premises. Su also hesitated because it was against doctrine to shed blood at the temple. But, in the end, he decided to help. The monks gave up their beds and desks for the deliveries and their food for the women. Many of the mothers went on to name their children Zhensheng, or "Born in the Quake". Some say giving birth in the temple was also a spiritual rebirth.

Tradition versus compassion and compassion wins. Wasn't Christianity originally supposed to be about something like that?

The last Beguine in the world has died. Read Marcella Pattyn's obituary on THE ECONOMIST website 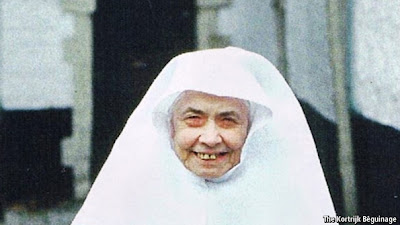 The Church of Jesus Christ of Latter-day Saints was recognized Thursday for donating more than 1 million pounds of food to Feeding America, one of the country’s leading nonprofit hunger-relief organizations.

Angela De Paul, Feeding America spokeswoman, said the LDS Church is being recognized as a "Supporting Partner" in the organization, which has the stated objective of ending hunger nationally.

"With food donations totaling more than 1 million pounds during Feeding America's current fiscal year, the (LDS) Church is the only faith-based donor to have achieved Supporting Partner status with the organization," she said.

For the past two years, Messiah Lutheran Church on Poseyville Road has been working on an endeavor to launch a car garage for the community. The garage, named “His Hands,” allows people to drop off used or no-longer needed/broken cars, and the garage will fix them and then sell them for $50 or so to people in need or who cannot afford a car. The church is formally launching the opening of the garage on Wednesday, May 15, and having a community celebration at the church from 11 a.m. to 1 p.m. The garage will partner with Delta College students with a blemish on their records to intern at the garage, giving the students an opportunity to graduate and learn on the job, something they may not have been able to do before with their past records. 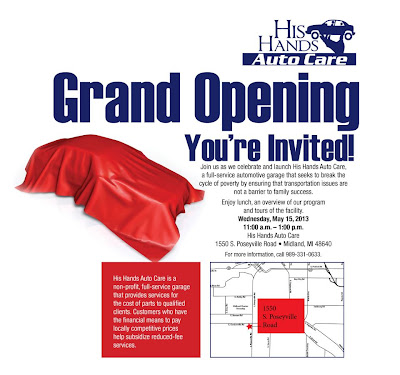 In South Florida, hundreds die every year without a survivor to claim them. The causes vary: liver failure, dementia. One homeless man died in 2011 when an industrial oven he was helping someone carry crushed him. Strangers — funeral homes or government workers — hold their bodies.

The Rev. Gabriel Ghanoum claims them. The local Catholic priest gives a ceremony for a new group of the lonely dead every few months.

He says to their ashes, "I can tell all of you, each one, that I love you."

He blesses each little box with the tips of his fingers.

"We pray that our brothers and sisters may sleep here in peace," he says. 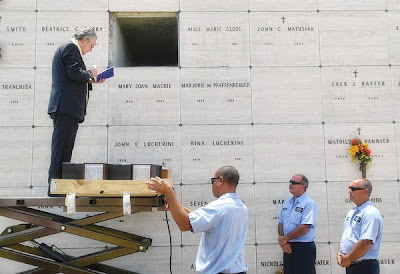 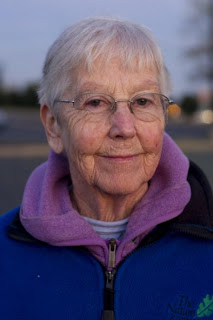 Sister Megan Rice broke into a Tennessee storage facility for depleted uranium in 2012. She splashed human blood on several surfaces. She was convicted along with two other peace activists of "invasion of a nuclear facility". The 83-year old nun faces up to 20 years in prison. Two other peace activists, 64-year old Michael Walli, and 58-year old Greg Boertje-Obed were also convicted on the same charge, even though investigators admit the three never got close to any nuclear material at the Oak Ridge facility.

The only regret Sister Rice expressed to the jury is that she had waited so long before taking direct action.

An unnamed woman in Hampton, Virginia accidentally flushed her $22,000 diamond ring down the toilet. She initially tried to recover the ring with a plunger on Friday but waited until Monday to call the Public Worlds Department to report the missing ring. The ring was found Tuesday after wastewater operations set up a debris trap down the water line and told the family to run water into all the drains in the home. Workers found the ring amongst the debris.

Each worker reportedly received a $25 gift card from the city to "recognize their above-and-beyond" work on the job.

For searching through all that sewage to make somebody happy and only getting an extra twenty five measly dollars for doing so, the wastewater operatives of the Hampton's Public Works Department are our...

It's a shit job but somebody's got to do it. I'm just exceedingly glad that it's them and not me. 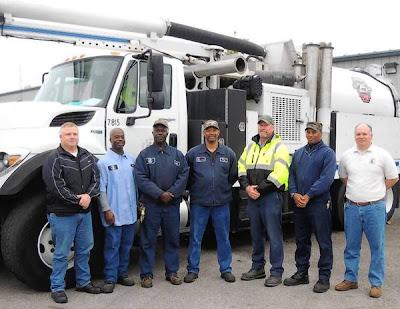