Spencer West looks like, and is, an improbable figure. So little of his torso remains that it’s impossible not to wonder how he’s survived the multiple operations that have removed more and more of his body. “My parents were told that I would never be a functioning member of society. I don’t say that to vilify the doctors in any way. They didn’t know what was going to happen to me. But my parents didn’t believe any of that. They never treated me any differently. They always treated me just like any other kid. They put me in gymnastics. I learned how to swim, all the things other kids would do, the 31-year-old says.”

A year ago, he climbed Mount Kilimanjaro for charity — on his hands. Now he is making his way along the side of a rocky Alberta highway, raising funds for an African water initiative. The Toronto resident is expected to complete his 300 km trek between Edmonton and Calgary in his narrow wheelchair and on his hands. 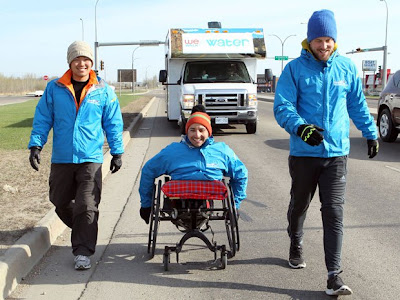